What is an In Memory Database?

In this article, we understand what the term “In-Memory Database” actually means. We see what scenarios they can be used, and why they are important.

As we go towards microservices architectures, what should a Java Programmer learn?

This is the last article in series of six articles on Java Programmer Essentials :

What Is An In-Memory Database?

Imagine a real world database such as MySQL Server or Oracle. The first step in using one is to install it. The second step would be to create the schemas, and the third involves creating the tables and other definitions.

With an in-memory database:

In memory databases allow you to focus on building a great prototype and validate business ideas.

Once you have a prototype ready, you can make a switch to a real world database.

When to use An In-Memory Database?

An in-memory database is of great value when a developer tries to learn a new language or framework. You would prefer to learn the features of the language or a framework, rather than be caught up with configuring a database, or learning how to create a schema.

Switching over to a real database is relatively easy, with a few simple configuration changes.

Another major advantage of an in-memory database is in unit testing or system testing. You don’t want to depend on external resources such as a database, because the information stored in them can change any time. This can lead to tests failing, even with code remaining the same!

It is much better to launch a database in memory, populate the data, run the tests and verify the results.

An in memory database also provides a great option when you are building prototypes or initial designs.

Features of in memory databases

An in-memory database typically supports a subset of the SQL language standard. Make sure that it supports all features you want to use. Such a database also offers a browser-based console, such as the following for H2: 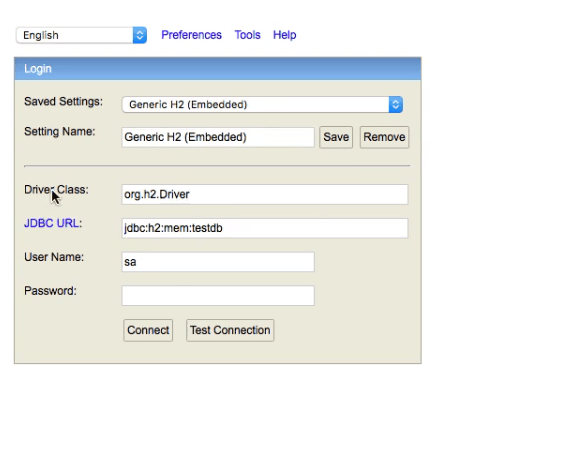 When you launch your application, you could also visit the in memory DB console and connect to the application. That would enable you to view the data stored there:

You can see data from various tables.

Popular examples of in-memory databases are

If you are developing an application using the Spring Boot framework, then the Spring Initializr web utility makes this very easy for you. You just need to add your in-memory database as a dependency to your configuration:

Notice how we added H2 and JPA as dependencies in our list.