Designing Great REST API is important to have great microservices. Contract First approach helps you in designing a great contract before implementing it. However, it does not come easy!

This is the third article in a series of articles on REST APIs:

There are several kinds of web services that are offered - REST, SOAP - among others.

For every services, there is a

A consumer needs to know the details of the service provided. For this reason, a contract needs to be in place. A service contract specifies:

In a Contract-First approach, you first define the contract, and then implement the service.

Let’s look at an example.

Let us first take up the case of WSDL - Web Service Definition Language format. Here is an example in use:

WSDL is typically used with SOAP/XML web services. In such a definition, you typically define:

When we start out with establishing a contract, we define a WSDL, and then share it with our consumer. All this can happen even before we implement the service and make it available.

Teams Can Develop In Parallel

Since coding happens based on the contract, the service provider and service consumer teams are clear about the communication approach and details. Hence, development can happen at the same time.

Teams Know What To Expect

Since coding happens based on contract, the producer and consumer teams have an idea of each others’ expectations. As a result, if cross team testing is not possible due to different pace of development, stub software can be used to mock the others behavior, all based on the contract.

Once the service parameters depend only on the contract, the actual software framework used to develop the service does not matter that much. The service provider and service consumer can use different technologies.

The schemas that are used to define the contract for a service, are well defined in the WSDL. Therefore, if parts of services are repeated across other services, then the corresponding schemas can be reused as well.

Most of this effort would center round agreement on a service contract. You need to make sure that the contract is well defined and does not change very often.

Mechanism For Contract Update And Sharing

Over the course of using a service, if you update a contract, it affects all the other stakeholders. Therefore, there has to be a proper mechanism to communicate the changes to the various consumers. 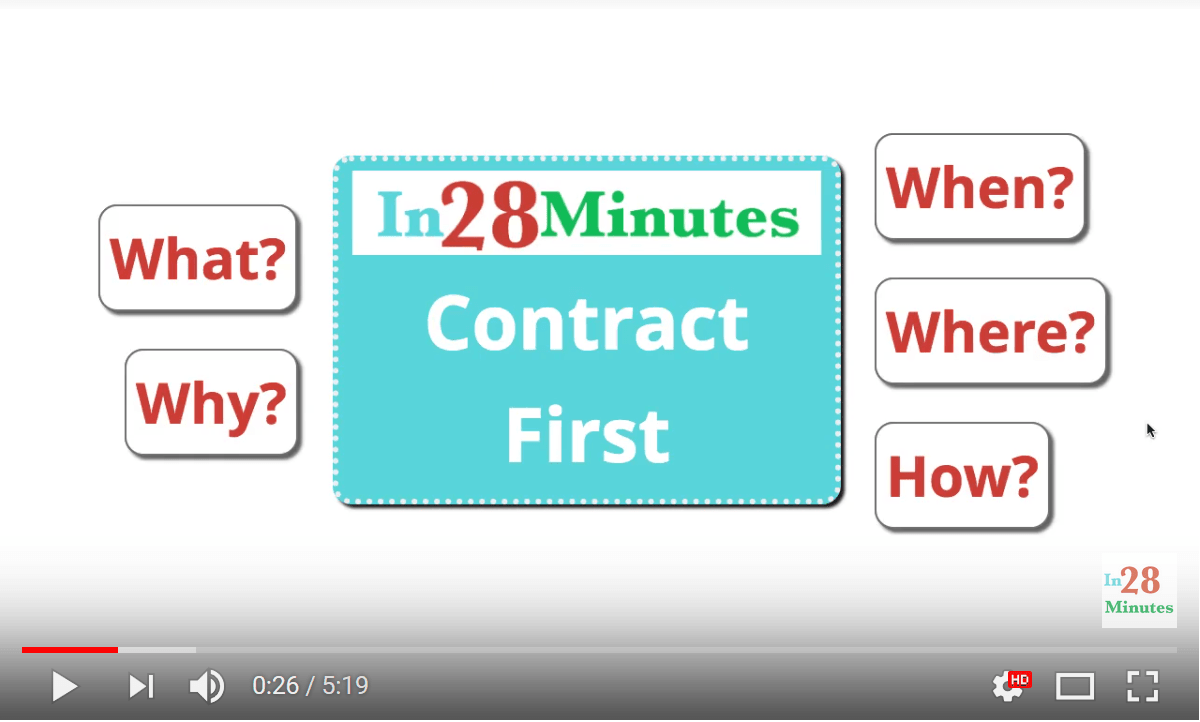 In this article, we discussed about the Contract-First approach, in the context of web services.

Docker Tutorial for Beginners - with Java and Spring Boot

Learn about Docker - What is Docker? Why Is Docker Popular? How to create Docker Image for a Java Spring Boot App?

What is DevOps? How is it different from Agile? What are the popular DevOps Tools? What is the role of Docker, Kubernetes and Azure DevOps in DevOps. Let's get started with a simple usecase.

In this article, we explore an important non functional requirement called performance.