In this article, we explore the important non functional requirement called performance.

What you will learn

This is the part of a series of articles on Non Functional Requirements:

When we type in a web page URL in a browser, performance from a users perspective is the time it takes for the page to load.

Performance is essentially a measure of how much time a system takes to respond to a user request.

There are three microservices in here, that communicate with several kinds of common components and other infrastructure. How would you go about improving the performance of a system such as this one?

Let’s look at different aspects of this goal.

The first step would be to improve the performance of code written for each of these microservices. If for instance Microservice1 is written in Java, then make sure you follow the applicable Java best practices for its code, such as:

If your application accesses a database in order to store and retrieve data, then such access needs to be efficient. For example, your microservice could be talking to a data service in order to manage its data, much like the following:

For that, you need to ensure that the databases used are fine-tuned to the kind of queries used by the microservices. This would include things such as:

Particularly in web applications, quite a few aspects of data handled by it can be cached.

If caching were not used, a lot of static content, including HTML/CSS/JavaScript would need to be transferred repeatedly between the server and the browsers.

Similarly, a microservice need not always fetch data from the data store. It could have a cache built in at the business logic, where it stores recently or frequently accessed data.

Another aspect to look at is the kind of caching mechanisms that can be used. The caching model could be a database-specific cache such as at the JPA level, or a distributed cache.

If you use a distributed cache, data accessed by different instances of a microservice could be cached centrally.

The next option available to improving application performance, is to build redundancy.

In our example, instead of having one instance each of Microservice1, Microservice2 and Microservice3, have say 10, 5 and 3 instances. The number of microservice instances created depends on the expected load on each such microservice. This would allow the application to handle a larger volume of requests within lesser time, and lighter load on the server in general.

You could also build redundancy by having multiple instances of each type of common infrastructure.

Another option is to improve the configuration of each of the servers. This could involve arranging for better CPU processing power, and augmenting the amount of available physical memory.

In our microservices architecture example, you have noticed that we have built the system in a modular way. We have designed different types of components for different responsibilities, as well as organized infrastructure code into different modules.

At a design level, one of the ways to improve the performance of a large monolith application would be to make it more modular. For example, splitting it up into components would enable us to deploy them onto different servers.

Until now, we have looked at different options that are available to improve the performance of an application. Let’s now look at a few best practices for improving an application’s performance.

You must have clear performance guidelines from the start of a project. Do not wait until the end of the project to outline these.

The requirements should clearly list out the system parameters, such as the number of system users, the peak load, the expected response time, among others.

You need to test your application’s performance early, and not just leave it to the end. Ideally, performance tests need to be part of your definition of done.

Make sure you profile your code at regular intervals of time, to identify places of improvement. After identifying them , effort should be put in to fine-tune the application to address this feedback.

Whenever you find a performance problem with your application, you need to identify the root cause. Also, when you need to give a fix for this, the solution should be one that gives the best possible improvement.

Nailing down the root cause of a problem is only possible if you have great visibility of what is going on.

The more visibility you have into an application, the easier it is to identify performance bottlenecks. 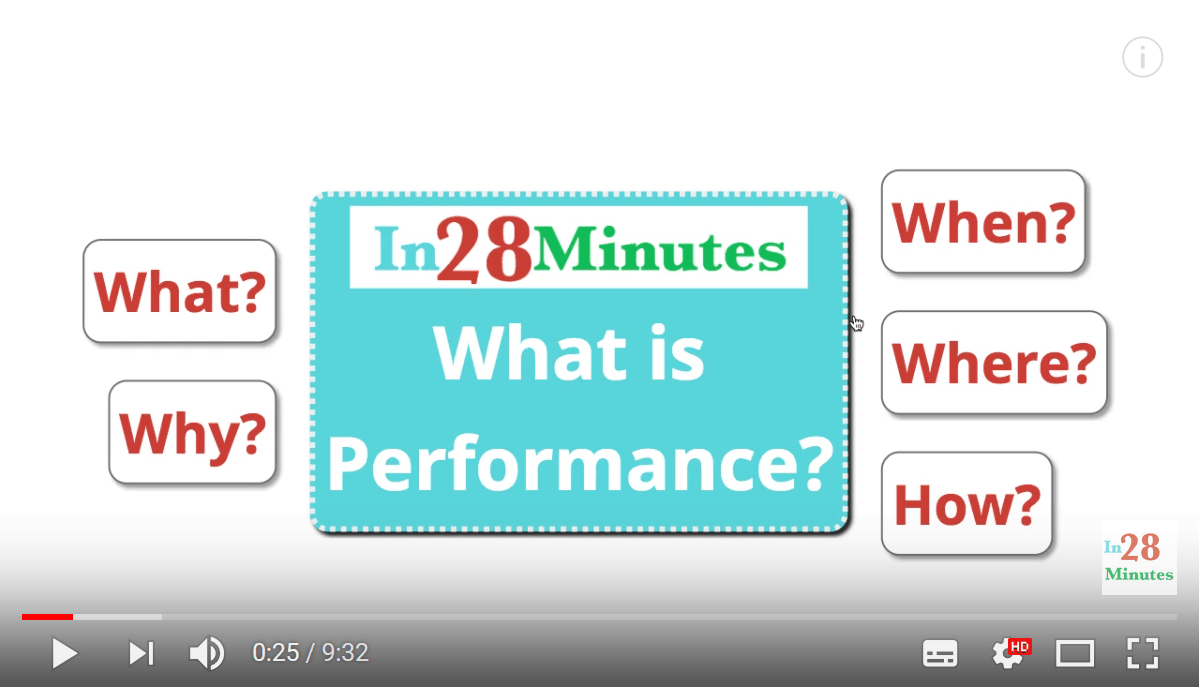 In this video, we say that performance is a measure of how much time a system takes to respond to a user request. We saw that there are a number of aspects to how to improve application performance.

The first aspect refers to improving the code to adhere to the language, framework best practices. Then, you could work on fine-tuning the performance to databases to which the system has access to. A third option would be to introduce caching as a practice to store recently, or frequently accessed data. Introducing redundancy improves performance by distributing the load on a server, among different nodes.

We then looked at general best practices for performance improvement. These include having clear performance guidelines early on, testing regularly for performance, profiling code frequently, and improving traceability.