In this article, we focus our attention on the DevOps.

What is DevOps? How is it different from Agile? What are the popular DevOps Tools? What is the role of Docker, Kubernetes and Azure DevOps in DevOps. Let’s get started with a simple usecase.

As with most buzzwords around software development, there is no accepted definition for DevOps.

Definitions vary from simple ones, like these two, to complex definitions that last a complete page of a book.

DevOps is the combination of cultural philosophies, practices, and tools that increases an organization’s ability to deliver applications and services at high velocity - Amazon Web Services(AWS)

DevOps is a collaborative and multidisciplinary effort within an organization to automate continuous delivery of new software versions, while guaranteeing their correctness and reliability - A Survey of DevOps Concepts and Challenges - L Leite

Instead of trying define DevOps, let’s understand how Software Development evolved to DevOps.

First few decades of software development was centered around the water fall model.

Waterfall model approached software development the same way that you would approach building a real estate project - for example, building an amazing bridge.

You will build software in multiple phases that can go on for a period any where between a few weeks to a few months.

In most waterfall projects, it would be months before the business sees a working version of an application.

While working in the waterfall model for a few decades, we understood a few key elements around developing great software:

Software Development is a multi disciplinary effort involving a variety of skills.

Communication between people is essential for the success of a software project.

In the waterfall model, we tried to enhance communication by trying to prepare 1000 page documents on Requirements, Design, Architecture and Deployment.

But, over a period of time, we understood that

Getting Feedback Quickly is important. Building great software is all about getting quick feedback.

Are we building an application which meets the business expections?

You cannot wait for months to get feedback. You would want to know quickly.

Will your application have problems if it is deployed to production?

You don’t want to know it after a few months. You want to find it out as early as possible.

The earlier we find a problem, the easier it is to fix it.

We found that the best software teams are structured to enable quick feedback. Anything I’m working on, I would like to know if I’m doing the right thing as early as possible .

Automation is critical. Software Development involves a wide range of activities. Doing things manually is slow and error prone. We understood that it’s essential to always look for opportunities to introduce Automation.

Having understood the key elements to develop great software, lets look at how we evolved to Agile and DevOps.

Agile was the first step in evolution towards implementing our learnings with enhanced communication between teams, getting feedback and bringing in automation.

Agile brought the business and development teams together into one team which works to build great software in small iterations called sprints.

Instead of spending weeks or months on each phase of development, agile focuses on taking small requirements called user stories through the development cycle within a few days, sometimes within the same day. 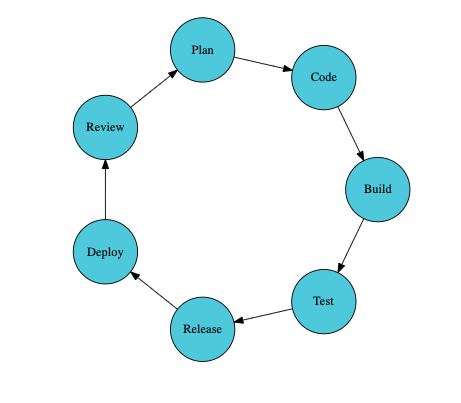 How did Agile enhance communication between teams?

Agile brought the business and development teams together.

In Agile, a representative from Business, called a Product Owner, is always present with the team, the team understands the business objectives clearly.

When the development team does not understand the requirements well and is going in a wrong path, Product Owner helps them do course correction and stay on the correct path.

Result : The final product the team builds is something that the business wants.

Another important factor is that Agile Teams have cross functional skills - coding skills - front end, api and databases, testing skills and business skills. This enhances communication between people that have to work together to build great software.

What are the Automation areas where Agile Teams focused on?

Software Products can have a variety of defects.

In general, agile teams were focused on using automation to find technical and functional defects as early as possible.

Is it sufficient if you have great automation tests and great code quality checks? You would want to run them as often as possible. Agile Teams focused on Continuous Integration. You make a commit to version control. Your Unit Tests, Automation Tests and Code Quality Checks were automatically executed in a Continuous Integration Pipeline. Most popular CI/CD tool during the early agile time period was Jenkins.

How did Agile promote immediate feedback?

Most important factor is that Business does not need to wait for months to see the final product. At the end of every sprint, the product is demoed to all stakeholders including Architecture and Business Teams. All feedback is taken in while prioritizing user stories for the next sprint. Result : The final product the team builds is something that the business wants.

Was agile successful? Yes. For sure. By focusing on improving the communication between business and development teams, and focusing on finding a variety of defects early, Agile took software development to the next level.

I, personally, had a wonderful experience working with some amazing teams in the Agile model. Software Engineering, which for me represents all the efforts in building software from requirements to taking applications live, for the first time, was as enjoyable as programming.

But, does evolution stop? Nope.

We started moving towards a microservices architecture and we started building a number of small api’s instead of building large monolith applications.

What was the new challenge?

Operations becomes more important. Instead of doing 1 monolith release a month, you are doing hundreds of small microservice releases every week. Debugging problems across microservices and getting visibility into what’s happening with the microservices became important.

It was time for a new buzzword in software development. DevOps.

What was the focus of DevOps?

Focus of DevOps was on enhancing the communication between the Development and the Operations Team.

How did DevOps enhance communication between teams?

What are the Automation areas where DevOps Teams focused on?

In addition to the focus areas of agile - Continuous Integration and Test Automation, the DevOps teams were focused on helping automate several of the Operation Teams Activities - Provisioning Servers, Configuring Software on Servers, Deploying Applications and Monitoring Production Environments. A few key terminology are Continuous Deployment, Continuous Delivery and Infrastructure as Code.

How did DevOps promote immediate feedback?

While we talk as if agile and devops are two different things to make things simple, in reality, there is no accepted definition for what devops means.

I see agile and devops as two phases that helped us improve how build great software. They don’t compete against each other but together they help us build amazing software products.

You are the star developer in a team and you would need to make a quick fix. You go to a github repository!

You quickly checkout the project.

You quickly create your local environment.

You make a change. You test it. You update the unit and automation tests.

You get an email saying it is deployed to QA.

Your QA team gets an email asking for approval. They do a manual test and approve.

Your code is live in production in a few minutes.

You might think this is an ideal scenario. But, do you know that this is what is happening in innovative enterprises like Netflix, Amazon and Google day in and day out!

This is the story of DevOps.

DevOps is a Natural Evolution of Software Development. DevOps is NOT JUST a tool, a framework or just automation. It is a combination of all these.

DevOps focuses on People, Process and Products. People aspects of DevOps are all about Culture and Create a Great Mindset. A culture which promotes open communication and values quick feedback. A culture that value high quality software.

They had different goals.

The goal of Dev team is to take as many new features to production as possible.

The goal of Ops team was to keep the production environment as stable as possible.

As you can see, if taking things to production is difficult, dev and ops are unaligned.

DevOps aims to align the Dev and Ops teams with shared goals.

Dev team works with the Ops team to understand and solve operational challenges. Ops team is part of the scrum team and understands the features under development.

How can we make this possible?

Break down the wall between Dev and Ops!

Getting Dev and Ops Together - Option 1

In matured Dev Ops enterprises, Dev and Ops work as part of the same scrum team and share each other responsibilities.

Getting Dev and Ops Together - Option 2

However, if you are in the early stages of devops evolution, how can you get Dev and Ops have common objectives and work together?

Here are some of the things you can do:

Which way you take, find ways of breaking the wall and get the Development and Operations team together.

Another interesting option emerges because of automation. By using Infrastructure as Code and enabling Self Provisioning for Developers, You can create common language that operations and development teams understand - code. More about this in the next couple of steps.

A DevOps Use Case

Consider the picture below:

Does this sound complex?

Let’s break it down and try and understand them.

No 2 : DevOps Continuous Deployment with Azure DevOps and Jenkins

What is the use of having great tests and code quality checks if you don’t run them often?

What is the use of deployment automation if you don’t deploy software often enough?

As soon as a developer commits code into the version control system, the following steps are executed:

As soon as there is an approval from the test team, the app is immediately deployed to the Next Environment.

The most popular CI CD Tools are Azure DevOps and Jenkins

No 1 : DevOps Infrastructure as Code with Terraform

In older days, we used to create environments and deploy applications manually.

Everytime you create a server, this needs to be done manually.

You do it manually.

What is the result of this?

The most popular IaC tools are Ansible and Terraform.

Typically these are the steps in IaC

Typically Provisioning Tools are used to provision servers and get new server ready with networking capabilities. The most popular provisioning tools are CloudFormation and Terraform.

Configuration Management tools are used to

Popular Configuration management tools are Chef, Puppet, Ansible, and SaltStack. These are designed to install and manage software on existing servers.

Role of Docker and Kubernetes in DevOps

What is the role of Docker and Kubernetes in DevOps?

Different microservices will have different ways of building applications and deploying them to servers.

How can we have similar way of deploying multiple types of applications? Enter Containers and Docker.

Using Docker you can build images of microservices - irrespective of their language - Java, Python or JavaScript. You can run these images the same way on any infrastructure.

Kubernetes adds on to this by helping to orchestrate different types of containers and deploying them to clusters.

Following are some of the important DevOps metrics you can track and improve over a period of time.

Following are some of the best practices with DevOps

How do you measure the maturity of your DevOps Implementations. Here are some of the important questions to ask.

Before You Go - Our Amazing DevOps Course

If you loved this article, you will love our course on DevOps