Questions To Ask About Continuous Integration

Let’s look at them one by one:

How frequently is code being committed to the version control system?

It is awesome to have great CI infrastructure in place with frequent builds, wonderful unit tests and integration tests. However, if code is not committed frequently enough to the repository, all this infrastructure is sitting idle.

Whenever you think your code is in a good working state, commit it to get immediate feedback. Do this five, ten, or a hundred times a day!

How often are your CI builds running?

Are they running every time a commit is done, every minute, every hour, or once a day? With CI, it is important to get immediate feedback. If you are running your builds less frequently, you might be enjoying all the possible benefits of CI.

Ideally, CI should run for every commit.

What’s in the Build?

What are the various steps that are run in your CI build?

Are all of these are run in CI?

It is desirable to have as many steps as possible as part of the CI build.

How fast is your CI build?

Any CI build should not take more than 10-15 minutes of time, as a benchmark. Of course, the steps involved in the build affects build performance.

As the number of steps in the build increase, the longer it takes. You need to find the right balance between the two, such as testing everything versus testing quickly.

One strategy would be to have two kinds of CI builds - one smaller frequent build, and one larger slower build that only runs from time to time.

This is one of the more fun events for the team. Having the member who breaks the build, buy lunch for the entire team is incentive enough for careful programming and commits! Not the least, it helps foster team building and team spirit. 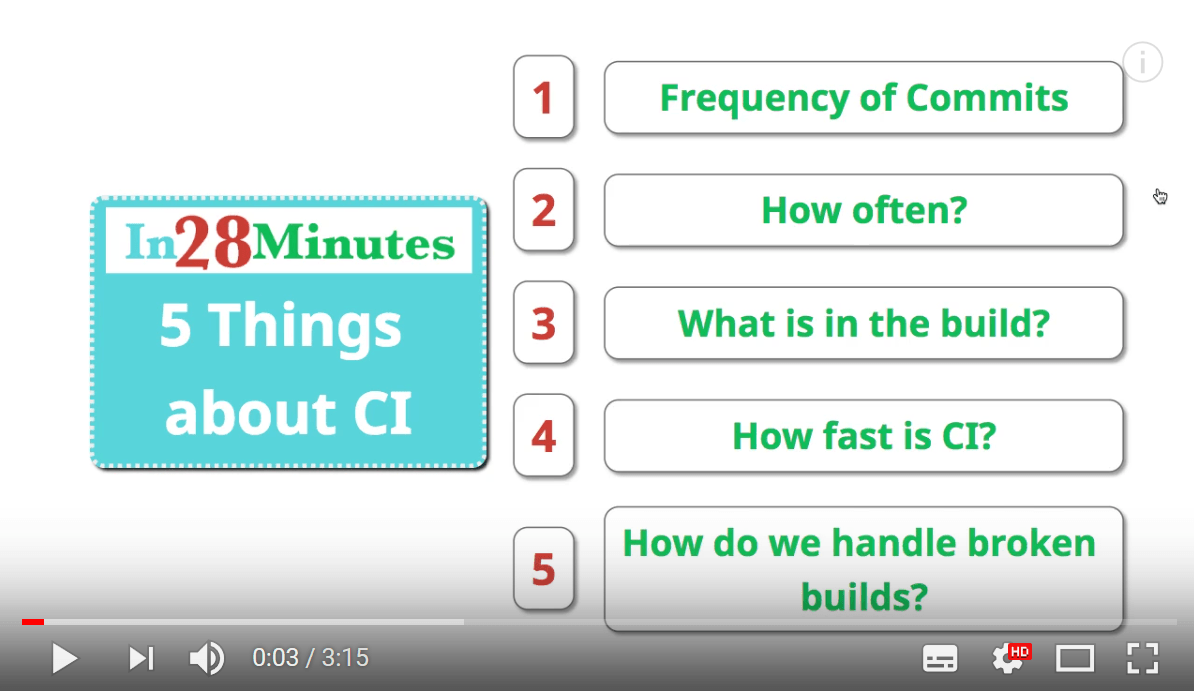 In this article, we explored the five important questions that a team using a CI infrastructure, to ask about its development process.

Docker Tutorial for Beginners - with Java and Spring Boot

Learn about Docker - What is Docker? Why Is Docker Popular? How to create Docker Image for a Java Spring Boot App?

What is DevOps? How is it different from Agile? What are the popular DevOps Tools? What is the role of Docker, Kubernetes and Azure DevOps in DevOps. Let's get started with a simple usecase.

In this article, we explore an important non functional requirement called performance.

This guide helps you create a Java full stack application with all the CRUD (Create, Read, Update and Delete) features using React as Frontend framework and Spring Boot as the backend REST API. We use Maven as the build tool.